Hydrogen and the Energy Transition

Hydrogen is already widely used in a variety of industries but has yet to reach its full potential. While the hydrogen industry has rapidly developed and production capacity is on the rise, a new DNV report, “Hydrogen Forecast to 2050” warns that its slow uptake will pose a considerable challenge, which can only be addressed through significant policy interventions.

To ensure an increase in the production of hydrogen, producers will need greater certainty if they are to have the confidence to make large-scale investments into projects. Group President and CEO of DNV, Remi Eriksen, puts it like this: “Policies do not match hydrogen’s importance. They will also need to support the scaling of renewable energy generation as well as carbon capture and storage as crucial elements in producing low-carbon hydrogen.”

While stronger policies are needed to increase hydrogen uptake, increased certainty for large-scale investments can only be achieved through greater cooperation between stakeholders. Strong and ambitious government strategies will only succeed if customer industries become more closely engaged with supporting the development of the entire hydrogen value chain. 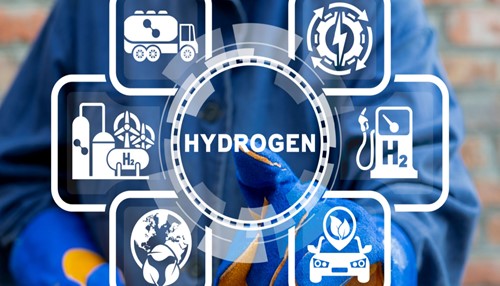 Hydrogen is already playing a growing role in heavy industry, and stronger action from all stakeholders could supercharge its development. DNV predicts that the manufacturing sector will begin making direct use of hydrogen by the late 2020s, to replace coal and gas in high-temperature processes. Hydrogen derivatives are also expected to play a key role in decarbonising the heavy transport sector by the late 2030s.

This year’s ADIPEC will explore the challenges and opportunities relating to hydrogen’s potential role in the energy transition. The conference will convene key sectors in the global energy supply chain to collaborate and accelerate the transition process and unlock real value for a decarbonised future.

In particular, ADIPEC’s Decarbonisation Zone will provide a platform for stakeholders to work on translating the energy industry’s net-zero pledges into actions. Our partner for the Decarbonisation Zone, @Hydrogen Council, will provide insight into what is required for accelerating the deployment of hydrogen solutions around the world. The Council’s unparalleled global reach combined with ADIPEC’s platform and network will ensure fruitful collaboration between governments, industry, and investors.