The deal, signed during the Adipec energy conference in Abu Dhabi, is entitled the “Partnership for Accelerating Clean Energy” (PACE) and encompasses four main pillars: the development of clean energy innovation and supply chains, managing carbon and methane emissions, nuclear energy, and industrial and transport decarbonization.

“The cooperation comes within the framework of the close friendship between the UAE and the United States of America” and “affirms the commitment of both sides to work to enhance energy security and advance progress in climate action,” according to a UAE government statement published by state news agency WAM. 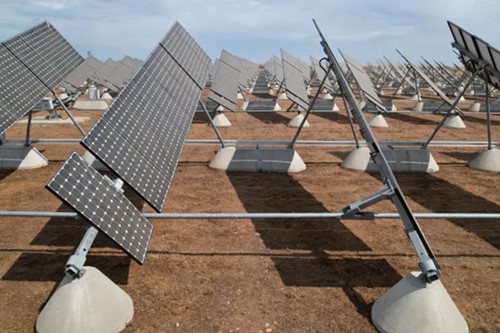 “Today President Biden again demonstrated his deep commitment to ensuring a global clean energy future and long-term energy security as the United States and United Arab Emirates announced a robust partnership to ensure the swift and smooth transition toward clean energy and away from unabated fossil fuels,” the White House statement said.

The two countries will set up an “expert group” to “identify priority projects, remove potential hurdles, and measure PACE’s progress in achieving its goal of catalyzing $100 billion in financing, investment, and other support and deploying globally 100 gigawatts of clean energy,” it said.

The UAE is a major oil exporter but has invested heavily in developing non-fossil fuel energy sources, including building the world’s largest single-site solar power plant and the first nuclear power plant in the Arab world. It plans to host the COP 28 climate summit in 2023.

The ambitious plan from the two countries comes at a time of rising demand for, and shrinking supply of, oil globally as years of under-investment in fossil fuels and months of Russia’s war in Europe have brought on tightened supply and high prices for consumers.

At the same conference where PACE was signed into action, oil and gas company CEOs warned of the dangers of limiting fossil fuel production for the sake of climate change prevention.

Whereas recent years would have seen robust demands for more renewable energy investment and expediting the move away from hydrocarbons — a continued pillar of the Biden administration’s goals — more leaders are now stressing the need for revived oil and gas production ahead of what could be a very difficult winter for Europe, and other parts of the world facing shortages of those commodities. Oil and gas prices have seen multi-year, and in some cases, record highs over the last year amid supply issues and geopolitical conflict.

Sultan Al Jaber, the CEO of Abu Dhabi National Oil Company (ADNOC), said in a speech at the Adipec conference Monday that “energy is everybody’s top priority” today as “a perfect storm” hits the global energy landscape. He said that years of under-investment in oil and gas production has worsened the situation.

“If we zero out hydrocarbon investment, due to natural decline, we would lose 5 million barrels per day of oil each year from current supplies. This would make the shocks we have experienced this year feel like a minor tremor,” Al Jaber said, stressing the importance of energy security.

He emphasized the need for both traditional energy investment and carbon emissions reduction, arguing that they are not mutually exclusive and saying that “the world needs maximum energy, minimum emissions.”

“It is not oil and gas, or solar, not wind or nuclear, or hydrogen. It is oil and gas and solar, and wind and nuclear, and hydrogen,” Al Jaber said. “It is all of the above, plus the clean energies yet to be discovered, commercialized and deployed.”

Still, many policymakers and institutions forcefully decry the use of fossil fuels, warning the far bigger crisis is that of climate change. In June, United Nations Secretary General Antonio Guterres called for abandoning fossil fuel finance, and called any new funding for exploration “delusional.”

Global economic forces don’t appear favorable to this aim, however. According to a recent report from UNCTAD, the United Nations Conference on Trade and Development, cross-border investment in climate change mitigation and adaptation is expected to fall this year amid a broader decline in investment projects.

And the Organization of Petroleum Exporting Countries, or OPEC, on Monday raised its medium and long-term forecasts for crude demand, and said that $12.1 trillion of investment was required to meet it.

OPEC’s outlook still differs from that of some other bodies, like the International Energy Agency, which sees oil demand peaking sometime in the middle of the next decade, as nations continue the push to transition away from fossil fuels.