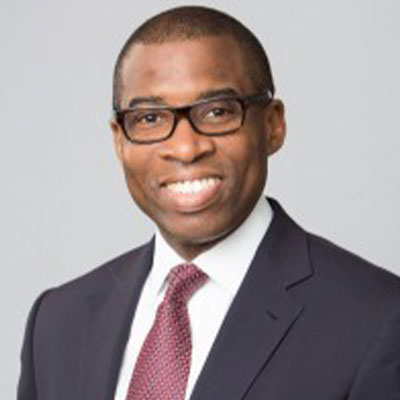 Uwem Ukpong is Vice President Global Services at Amazon Web Services (AWS). In this role, he is responsible for helping customers ensure a seamless migration and modernization to the cloud and supporting them once on the cloud. Uwem manages a large globally distributed team to help customer scale in the cloud with a focus on innovating and deeply collaborating with teams across the broader AWS organization.

Uwem began his career at Schlumberger, where he held multiple oilfield services operating roles, including petrophysicist and reservoir engineer. He then served as President of Schlumberger Software, where he was responsible for strategic development and commercialization of oil and gas software and services for reservoir characterization, production optimization, and drilling.   Uwem earned a Bachelor of Science in mathematics and computer science from the Federal University of Technology, Owerri, Nigeria, and a Master of Science in petroleum engineering from Heriot-Watt University, Edinburgh, United Kingdom.