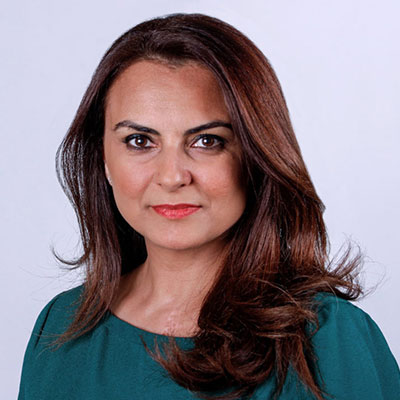 Mina Al-Oraibi is the Editor in Chief of The National newspaper, a daily English language regional newspaper based in Abu Dhabi. An Iraqi-British journalist, Mina has over 18 years of experience covering Middle Eastern, European and American affairs. She has conducted multiple high profile interviews including with Iraqi Prime Minister Mustafa AlKadhimi, US Secretary of State Mike Pompeo, former President of the World Bank Jim Yong Kim and former UK Prime Minister Tony Blair.

Prior to assuming the role of Editor in Chief of The National, Mina was a Senior Fellow at the Institute for State Effectiveness (ISE) and a Yale World Fellow. At ISE, Mina is working on developing policy recommendations for improved governance in the Middle East and North Africa region, with a focus on Iraq and Syria.

Before starting her fellowship at Yale, Mina was the Assistant Editor-in-Chief of Asharq Alawsat, the international Arab-language daily newspaper 2011-2015. Previous to that, she was the Washington Bureau Chief for the newspaper.

Mina is an Advisor to the Global Dignity Day Movement and a member of the International Media Council. She is also a member of the board of trustees of the American University in Iraq - Sulaimani. Mina was named as a Young Global Leader by the World Economic Forum. She completed her Bachelors of Arts (Honours) and Masters of Arts in Modern History from University College London.