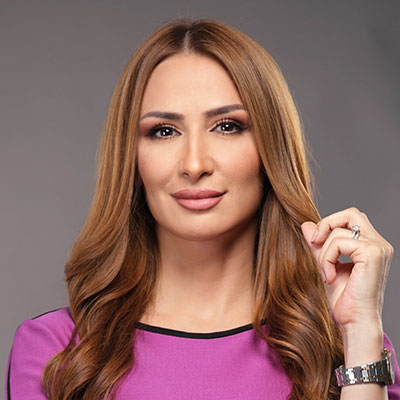 She is the Editor-in-Chief of Business and Program Presenter at Sky News Arabia. She joined Sky News Arabia in 2016 and has been covering international business news and global and regional stock market related news. She also presents the weekly “World of Energy” program, which features different topics in the energy sector, highlights energy issues around the world and interviews decision makers and analysts in this vital sector.

During the span of her career at Sky News Arabia, Lubna has interviewed a number of world leaders, ministers, analysts, and Chief Executive Officers including: Christine Lagarde, President of the European Central Bank, David Malpass, President of the World Bank Group, John Kerry, the first United States special presidential envoy for climate and Bill Gates. She has also covered various events around the world including the IMF and World Bank meetings, the World Economic Forum in Davos, and the Future Investment Initiative (Davos in the Desert) in the Kingdom of Saudi Arabia.

Lubna’s first break in journalism was at CNBC Arabia as a news anchor and presenter. Also having worked in investments prior to entering the media industry, Lubna is able to examine the most important investment decisions in the business sector.

She holds an MBA in Master of Business Administration Economics and a Masters in Applied Finance and Banking from University of Wollongong. Lubna loves to practice sports in her free time.