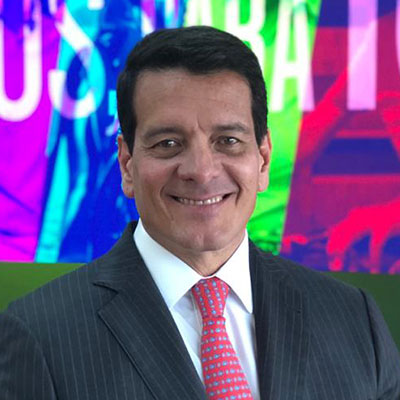 Mr. Bayón, 56, is CEO of Ecopetrol Group, Colombia's leading energy company, and one of the most important in the Americas. He has over 30 years of experience in the energy industry both internationally and in Colombia. As an active member of different global platforms and initiatives of the World Economic Forum, such as the Oil & Gas Governors community, he has been an invited speaker on issues that include energy transition, sustainability, and technology.

In his over six years at Ecopetrol, the last four and a half as CEO, he has led the company's transformation and energy transition processes, with a robust plan to diversify the business and decarbonize the operation through, among others, renewables, electrification, natural climate solutions, and hydrogen. All these underpinned by innovation and technology as catalyzers for sustainability, what Ecopetrol has called T-ESG (Technology, Environmental, Social and Governance).

The transformation process led by Mr. Bayón, has allowed Ecopetrol to successfully address and overcome the complex global context resulting from the pandemic and the volatility in oil prices, achieving solid operational and financial performance, key to strengthen Ecopetrol as the company faces the challenges and opportunities of the energy transition.

Some of his main achievements include:

In 2020, he was recognized with the “Businessman of the Year” award by “La República”, a renowned Colombian national newspaper, in its 17th version.

Before assuming as CEO, he acted as COO of Ecopetrol. He also worked for over 20 years at BP. His last role was as Senior Vice President of BP America in the United States and Global Director of Deepwater Response.

Mr. Bayón was born in Colombia, has US and Colombian nationalities, and holds a bachelor’s degree in mechanical engineering from Universidad de los Andes (Bogotá). He started his career in the energy industry in 1991 at Hocol (Shell).