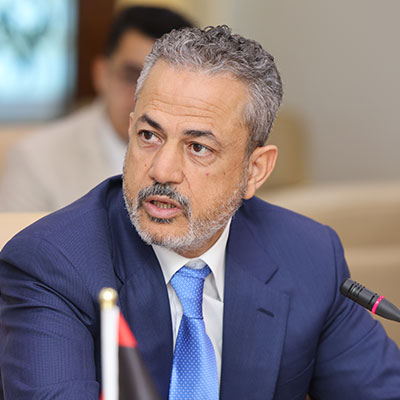 Mr. Farhat Ben Gdara was appointed as the Chairman of the Libyan National Oil Corporation (LNOC) on July 2022.

Mr. Ben Gdara has a 30-year track record in leading Libyan government entities and shaping government policies. He held the position of the Governor of the Central Bank of Libya (CBL)from 2006 until 2011. After the position of the Deputy Governor of the from 2000 to 2006, Among his achievements during this period were the development of the national banking system and the strengthening of the country’s inward investment conditions, both of which had a profound impact on the revival of the national economy.

This strong track record of running complex institutions was among the reasons for his appointment as Chairman of the LNOC, the country’s leading energy supplier and one of its largest employers.

As a former member of the Libyan Supreme Council for Oil and Energy between 2006 and 2011, Mr. Ben Gdara has a deep understanding of the country’s energy sector and its role in national productivity.

Since becoming Chairman, Mr. Ben Gdara has introduced a strategic plan to increase the production of oil and gas, enhance Libya’s competitiveness in the energy sector, and optimize partnerships, while looking ahead to the role the company can play in the global transition to renewable energy sources.