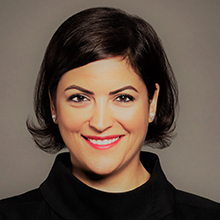 Widad joined Emerson as a Marketing Engineer in 2008 and has been steadily promoted since, to the point where she led the Marketing Department as the Marketing Director from 2014 to 2018 before taking the role of Vice President and General Manager for UAE, Oman,Yemen & Lebanon in July 2018; and becoming the first female Vice President & GM for Emerson in MEA.

In this role, Widad manages an organization of 120 employees covering sales, service, operations, finance, legal, HR and admin. Widad is also a member of the Diversity & Inclusiong Executive Council for Emerson MEA.

Before joining Emerson, Widad held various roles in engineering, marketing and sales. She started her career in Lebanon in 2002 as a Mechanical Engineer designing Heating, Ventilation, and Air Conditioning and Plumbing systems for residential buildings and commercial centres. In 2005, she moved to Dubai to become Marketing and Sales Manager of a local manufacturing and trading company specialising in industrial electrical supplies. After a year-long stint in 2007 on the creative side of marketing with Zee Network’s Zee Arabiya television youth channel, she joined Emerson.

Widad is a graduate of McMaster University in Canada and has a BEng in Mechanical Engineering. She also holds a Post Graduate Diploma in Organization and Business Psychology from University of Liverpool.

Widad is a mother of a five years old boy, and plans to continue balancing her growing career and motherhood.