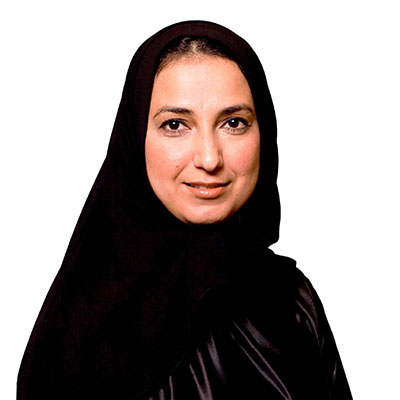 Permanent Representative of the UAE

Her Excellency Dr. Nawal Al-Hosany is the Permanent Representative of the UAE to the International Renewable Energy Agency (IRENA) since April 2018.

Previously, Dr. Al Hosany held the position of the Executive Director of Sustainability at Masdar, the international renewable energy leader based in Abu Dhabi. She also served as the Director of the Zayed Future Energy Prize (now known as the Zayed sustainability Prize) for eight years between 2011-2018. She is currently a Jury member of the Prize. She was also the Deputy Director General of the Emirates Diplomatic Academy (EDA) between 2017-2018.

Apart from her current position and as part of her professional career, Dr. Al-Hosany holds positions across various business sectors, government entities and academic institutions in the UAE and internationally. She is also an active and prominent member of several key international, regional and local climate-focused boards and committees, including the advisory council of National Geographic magazine, the advisory board of the Payne Institute in Colorado School of Mines, the advisory Panel for the Momentum for Change initiative of the United Nations Framework Convention on Climate Change (UNFCCC). She is a board member of Sustainable Energy for All (SEforALL), the international organization that works in partnership with the United Nations to accelerate action on Sustainable Development Goal 7 (SDG7), the Paris Climate Agreement, the Emirates Schools Establishment and the UAE Sailing & Rowing Federation. Concurrently, she serves as the Vice Chair for the Global Council of the Sustainable Development Goals (SDGs).

Dr. Nawal Al Hosany’s numerous professional achievements have been widely acknowledged through prestigious awards. In July 2018, Dr. Al-Hosany was presented the “Doctor of letters Honoris Causa” from Keele University in the UK in recognition for her achievements in the field of sustainability. Dr Al-Hosany also received the “Arab Woman Award” and the “Emirates Business Women Award”.

She graduated from the Faculty of Engineering at the UAE University in 1992 and obtained her PhD from Newcastle University in the UK in 2002.

Dr. Al-Hosany is also credited as one of the first two Emirati women to climb Mount Kilimanjaro, the highest free-standing mountain in the world at 5,895 metres above sea-level.