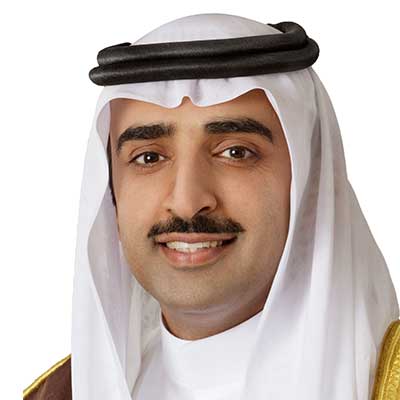 Sh. Mohamed bin Khalifa bin Ahmed Al-Khalifa graduated with honors from the King Fahd University of Petroleum and Minerals with a B.Sc. degree. He completed his higher education in the United Kingdom with a Masters Degree from the University of Cambridge and an Advanced Masters from the Imperial College of Science. He also holds an MBA from DePaul University, Kellstadt Graduate School of Business.

He joined the Ministry of Finance, Kingdom of Bahrain in the year 1999 where he became Director of Government Shareholdings in 2005. During his tenure at the Ministry, he worked on the privatization of key projects including the privatization of Power Plants, Seef properties IPO and Muharraq STP. He is a former Board member of The Bahrain National Gas Expansion Co., Lulu Tourism Co.

Under the Royal Decree No. 45 for the year 2016, issued by His Majesty King Hamad bin Isa Al Khalifa, King of Bahrain, on 3rd June 2016, Sh. Mohamed bin Khalifa bin Ahmed Al Khalifa was appointed as the Minister of Oil.