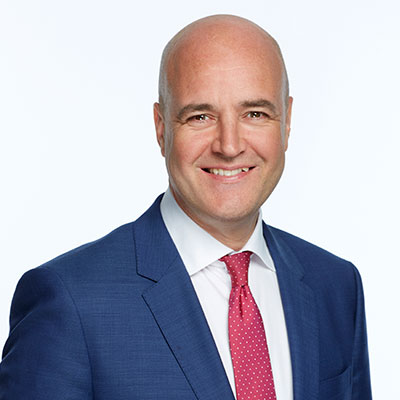 Fredrik Reinfeldt has been active in Swedish and international politics for over 25 years. Reinfeldt reinvented the Moderate Party (centre-right) creating the New Moderates and entered into an alliance with three other centre and centreright parties. The four-party alliance won two successive elections and Reinfeldt, as Prime Minister, presided over two coalition governments (2006- 14) – the longest non-socialist government period in modern Sweden.

During his time as Prime Minister, Reinfeldt reformed the Swedish economy and labour market, making Sweden one of the most competitive countries in Europe. More than 300,000 new jobs were created despite the financial crisis. The Swedish economy had higher growth rates and sounder public finances than many other European countries during his time in office. Sweden was also the only country in the EU that lowered its national debt during the financial crisis.

In August 2019 he was appointed chair of the newly formed Centrum för AMP. Centrum för AMP is a centre of excellence in the field of activating public spaces. It´s a Swedish model of the BID-concept (Business improvement district) that successfully has been used in for example New York and London.

During the years 2016-2019 he held the post as chair to the Extractive Industries Transparency Initiative (EITI). The EITI is an international coalition of stakeholders working together to promote open and accountable management of natural resources. Over the past decade, they have developed the EITI Standard, which is now implemented by 55 countries around the world.

Between 2016-2020 Mr Reinfeldt was appointed as Senior Advisor to Bank of America Merrill Lynch.

Since 2016 he is also Political Advisor to Nordic Capital, a leading Northern Europe private equity investor.