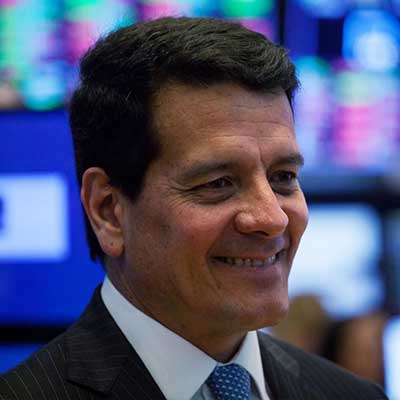 In his more than five years at Ecopetrol, four of them as CEO, Mr. Bayón has led a transformation process that has allowed the Company to successfully address the complex global environment generated as a result of the fall in international oil prices and the pandemic.

He has managed to ensure Ecopetrol’s continued status as Colombia's principal company as well as strategically position it in the American continent, especially in the United States, Brazil and Mexico.

The principle of “Life First” is at the core of the DNA that he promotes among Company workers.

He leads the Ecopetrol Group's energy transition and digital transformation processes, spearheading a comprehensive renewable energy production, emissions reduction and decarbonization program, as well as ambitious initiatives in innovation and technology. Among his main achievements he can list the unprecedented improvement in the quality of fuels produced in Colombia.

He has also promoted diversity and inclusion initiatives that have been recognized by international organizations.

For over 20 years he worked for British Petroleum, both in Colombia and abroad. His last position with that company was as Senior Vice President of BP America in the United States, and Global Director of Deepwater Response. Mr. Bayón began his career in the oil industry in 1991 at Hocol.

In 2020, he was nominated and honored by executives from different sectors with the “2019 Businessman of the Year” award as part of the 17th version of the survey conducted by La República, a well-respected national newspaper. Mr. Bayón received this award on behalf of all Company employees.

During the last two years, Mr. Bayón has guided the process for the acquisition of 51.4% of ISA's shares by Ecopetrol, one of the most important transactions in the region in the last decade. This acquisition gave birth to a major energy group in the western hemisphere, one that focuses on leading the energy transition process, and is already able to show visible results in decarbonization and electrification.