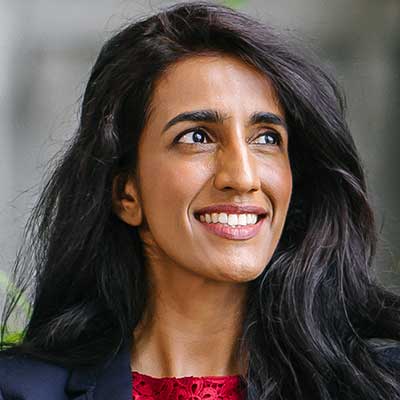 Dr. Ayesha Khanna is Co-Founder and CEO of ADDO AI, an artificial intelligence (AI) advisory firm and incubator. She has been a strategic advisor on artificial intelligence and smart cities to leading corporations and governments. Khanna also serves on the Board of Infocomm Media Development Authority (IMDA), the Singapore government's agency that develops and regulates its world class technology sector. She has also advised clients such as SMRT, Singapore's largest public transport company, SOMPO, Japan's largest insurance firm, and Smart Dubai, the government agency tasked to transform Dubai into a leading smart city. She is the co-author of Hybrid Reality: Thriving in the Emerging Human- Technology Civilization.

In 2017, ADDO AI was featured in Forbes magazine as one of four leading artificial intelligence companies in Asia and Ayesha was named one of South East Asia's groundbreaking female entrepreneurs by Forbes magazine in 2018. More recently, in 2019, Khanna was invited to become a member of the World Economic Forum's Global Future Councils.

Khanna spent more than a decade on Wall Street developing large scale trading, risk management and data analytics systems. She was co-founder of the Hybrid Reality Institute, a research and advisory group established to analyse the social and economic impact of accelerating technologies. She directed the Future Cities Group at the London School of Economics, and has been a Faculty Advisor at Singularity University.

Khanna has been named one of Singapore's leading female entrepreneurs and a leading Asian fintech influencer by Fintech Asia. She also served on the Singapore Ministry of Education’s Steering Committee on future skills and applied learning for emerging industries.

Khanna is author of Straight Through Processing and co-author of Hybrid Reality: Thriving in the Emerging Human-Technology Civilization. She is the Founder of 21st Century Girls, a charity that delivers free coding and artificial intelligence classes to girls in Singapore.