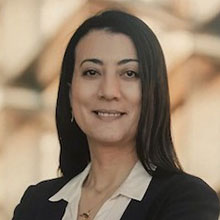 Dr. Anissa Bendjeriou-Sedjerari is Industry & Research Center Liaison at KAUST Catalysis Center (KCC). She was awarded a PhD in Materials Science from the University of Science and Technology of Montpellier (France) followed by research scientist positions at KCC, CALTECH and Ecole Normale Superieure de Lyon (ENS-Lyon).

Her research interests include organometallic chemistry, materials science, more specifically, the designs, characterizations, and applications of heterogeneous catalysts in Oil & Gas industry, such as, but not limited to, hydrocarbon conversion, CO2 conversion, and N2 activation, ammonia synthesis. Her current industry portfolio encompasses a range of projects such as crude oil to chemicals, carbon capture, valorization, Hydrogen production and storage, plastic recycling.
Over the last years, she played key roles in several academic and industrial collaborations within KCC, KAUST, and international institutions, including EPFL-Lausanne and UC-Davis, CALTECH, USA. Her broad research interests have been published in numerous international journals.
Besides, she is an active member of the MEPEC (Middle East Process Engineering Conference and Exhibition), GDA (Gulf Downstream Association). She is also involved in the women program with Aramco (LEWAS, GROW)  and promotes female scientists’ not just at KAUST but also in the Middle-East in order to empower Women in Oil and Gas Industry, one of the challenge of the Saudi Vision 2030.