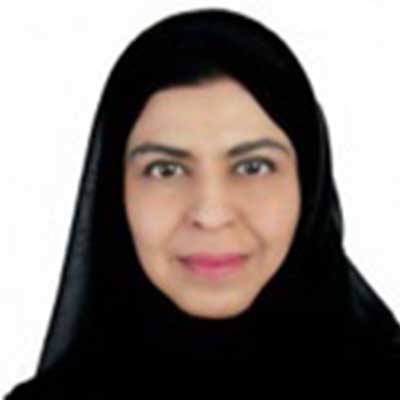 Shamsa poses Over 23 years’ experience in the oil industry, covering the entire Exploration & Production value chain. Graduated from University of Tulsa, USA with B.Sc. in Geosciences, she started her career in Schlumberger as Interpretation Geologist, focusing in Fracture and Fault Analysis. In 2000, Shamsa joined ADNOC Onshore, as a Reservoir Geologist, specializing in building Geological models for major developments that are producing today.

In 2010, she was appointed Vice President Exploration and Undeveloped Fields and Reservoirs, where she was instrumental in maturing the undeveloped portfolio and managed to obtain shareholders’ approval to develop a number of fields and reservoirs which contributed over 100MBD to the ADNOC production Increase. In 2011, Shamsa was assigned as Vice President Development in charge of three fields: Qusahwira, Shah and Mender contributing around 100 MBD in production. In 2013, she was appointed Vice President Drilling Technical Support and Services, responsible of all technical aspects of drilling including Drilling Fluids, Cement, Completion, Directional Drilling and Logging. As Vice President Drilling Technical Support and Services, Shamsa managed major contracts associated with about 30% of the company capital expenditure and lead the team for major cost optimization exercise which resulted in reducing 15% in annual technical drilling budget.

In 2017, Shamsa was transferred to ADNOC Offshore and promoted to Senior Vice President (Strategy and Corporate Support), responsible for Strategy & corporate planning, procurement, compliance and Information Technology. Shamsa introduced a number of long-term efficiency strategies to drive the organization towards excellence and maximize value for its shareholders. Initiated the first Profit Centric Business Plan (BP) to transform the BP from strategic/technical centric to profit centric to enhance the decision-making process. As a result, Unit Technical Cost and lifting cost improved by 7-10%. Introduced “Self Due-Diligence” culture in the ADNOC offshore organization, to strengthen the first company barrier (business unit) and increase compliance to quality standard and procedures, this resulted in drastic reduction in non-compliance findings. Led major transformation in Procurement to improve tender strategies and contract management, which resulted in improving performance and value.

Other Interests, Achievements, and Responsibilities: