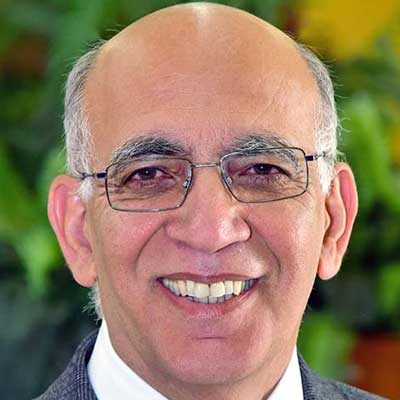 Professor Ahmad is the Chancellor of Abu Dhabi University, having joined the University in June 2017. As a senior social scientist, he is an elected Fellow of the Academy of Social Sciences. Since his appointment, Abu Dhabi University has increased student numbers and revenue, launched a College of Health Sciences, expanded the teaching portfolio, competed successfully for research funding and improved its research profile, opened a state of the art campus in Al Ain, gained prestigious new accreditations (e.g. RIBA, APHEA, ABET accreditation for new programs), renewed existing accreditations (including AACSB and EQUIS), strengthened partnerships with leading universities in North America, Europe, Australia and other regions, and established partnerships with public and private sector organizations.

Professor Ahmad was previously the Deputy Vice Chancellor Academic at Middlesex University, with responsibility for faculties, academic development, teaching and learning, research, knowledge transfer, academic quality and the University’s Campus in Dubai. He has been a Professor at the University of Leeds, held academic posts at Universities of York (Senior Research Fellow/Associate Professor), Bradford(Research Assistant, Lecturer, Associate Professor) and the Open University, and a visiting position at University College London (Visiting Professor). His experience as the Chief Social Scientist at the Office of the Deputy Prime Minister, UK, and as Vice Chairman of the North Bradford Primary Care Trust, reflects his keen interest in policy.

Professor Ahmad has taught at undergraduate and postgraduate levels, supervised and examined doctorates, and served on national and international panels on teaching and assessment. He was member of the Strategic Advisory Committee on Research and Innovation of the Higher Education Funding Council England, the Strategic Research Board of the Economic and Social Research Council and the Disability and Social Care Committee of the Joseph Rowntree Foundation. Professor Ahmad has held research grants to the value of 5M GBP. His has published extensively and is or has been on the editorial boards of major international journals (Health; Sociology of Health and Illness; Health and Social Care in the Community; Critical Public Health; Creative Industries Journal; Critical Muslim). Until recently, Professor Ahmad was a Trustee of the Woolf Institute Cambridge and was involved in the relaunch of the Muslim Institute London.