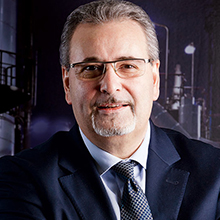 Pierre Leretz, President of Vyco Ltd, an Industrial Automation and Innovation Consultant Company, throughout his career has occupied Executive positions at Blue chip companies like Schlumberger, Elsag Bailey and ABB. In 2017 he occupies the 34th position in the 2017 ‘Power 50’ list for the Middle East. Pierre Leretz has extensive international business experience, working in diverse geographies around the world with a strong focus on energy markets. He relocated to the Middle East in the late 1990s, witnessing the region’s rapid development into a globalised modern hub for innovation, investment and trade. Prior to that, Leretz was involved in devising marketing strategies, and managing new business operations in Europe, Africa and the Middle East.